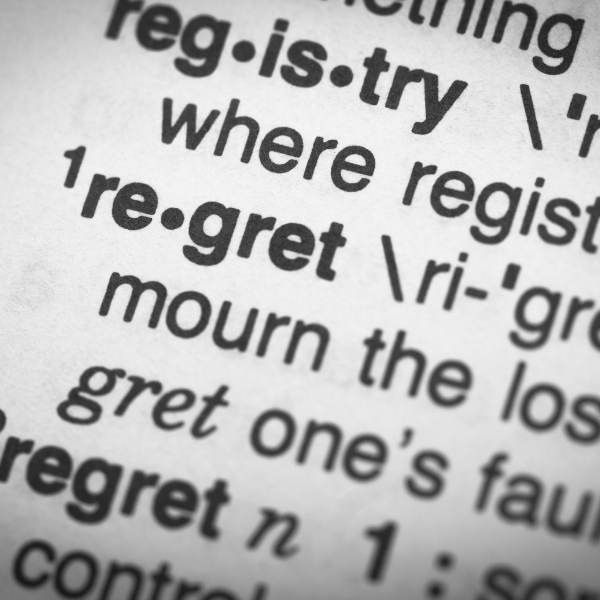 Instead of bringing a case to the table, on today's episode Ferne opens the floor to the topic of regret.

How To Deal With Regret - Fridays with Ferne: Episode #43

Today’s episode of Fridays with Ferne is a little bit different than usual. Instead of bringing a case to the table, Ferne opens the floor to the topic of regret. What do you do when you have a huge regret? How do you deal with that all-consuming feeling?

[00:00:00] Kim Ades: Hello, hello. My name is Kim Ades, I'm the President and Founder of Frame of Mind Coaching and the Co-founder of The Journal That Talks Back. Today is Fridays with Ferne and you have just joined us for The Frame of Mind Coaching Podcast and my daughter's here! And I'm always excited when she's here. Ferne, welcome.

[00:00:26] Kim Ades: I'm great, I'm super excited. It's fun to see you in that environment in Montreal. I was just there yesterday, so I know exactly where you're sitting. That's cool. What do you have for me today?

[00:02:49] Kim Ades: So the most powerful way of dealing with regret is understanding that things go exactly as they need to go.

When we look back on a decision we made and believe that it was the wrong decision or the wrong outcome or whatever it is, it's not a great use of time, right? Because our biggest regret is we didn't handle that moment well. But when we have regret, we're not handling this moment well either.

[00:04:00] Ferne Kotlyar: But do you think that sometimes you can't always choose what you think? Or is it always something you have control over?

[00:04:13] Ferne Kotlyar: So when you have that nagging thought at the back of your head, that's really always there always bothering you, how do you get rid of it? Like, you know that you shouldn't be thinking about it. You know that there's nothing-- you can't go back in time, you can't change it now. So how do you move forward from that knowledge, even though it's constantly at the back of your head?

[00:04:32] Kim Ades: So it's an awareness piece, right? So when you have something that's nagging at you at the back of your brain, you want to bring it to the front of your brain and say, "what is it that's nagging me? What are the beliefs that I have about this particular event, situation, person, encounter that is causing me to feel regret? What beliefs do I have?"

And then what you want to do is look at those beliefs and say, "yeah, but what if I don't know what's ahead? What if actually this is perfectly designed for me? What if this is the most perfect thing? Even though right now in this moment it doesn't feel perfect. Even though right now it feels like that was a disaster or it was a tragedy. What if it was the most perfect thing?"

So, regret isn't a wise use of time because there is nothing we can do about the past. It's gone. The question is, what do we do now? What do we do moving ahead? And so when someone experiences regret, and they are ruminating in their minds and they think things should have gone differently, "we should have spoken up. We should have addressed this"... All the "should have's"...

We say, okay, well that didn't happen. We are here now. And let's take on the perspective that things unfolded as they should have. The question is, where are we now, and what are we going to do moving forward, moving ahead?

[00:07:00] Ferne Kotlyar: So if one of your clients has a strong regret, what's kind of the first step into moving forward?

[00:08:12] Ferne Kotlyar: Can you give me an example of a belief that might cause somebody pain?

[00:10:11] Kim Ades: "They're so pushy". All of that chatter that goes on in your brain. And already, you know, it's a pretty emotional experience when someone as close to you as your mother passes away, but now you're layering it with a whole bunch more.

[00:11:18] Kim Ades: In the moment, my belief was my siblings were pushy. But the truth is they were caring for me, they were worried that I was there for too long and they thought that I should take a break. Those are two very, very different beliefs. Knowing that they were just being caring about me is a very, very different experience if I'm replaying that moment.

[00:12:20] Ferne Kotlyar: But does it just happen, like, at the snap of your fingers, you change your attitude about it?

[00:12:26] Ferne Kotlyar: Or does it take like time and kind of repetitive action to process these thoughts and reprocess them and keep processing them until it gets to a better place?

So, my conscious self... And I've made this decision over years and years and years, is to take full responsibility for the way I feel. And when I feel anger, regret, sadness... This constant feeling of beating myself up because I wasn't there in that moment, that's not me taking care of my own emotional state. And so I choose that.

[00:13:59] Ferne Kotlyar: Do you think that it's a repetitive choice? Like, you make that choice over and over and over again? Or do you think it's like kind of a one thing, one time decision and then it persists?

[00:15:27] Ferne Kotlyar: Yeah. So if there was somebody out there who had a lot of regret and was living in one of those states, what would be kind of the first thing you'd tell them to do? What's the first step into changing their thoughts, and thinking about kind of their own thought process and reassessing that making a better choice?

[00:15:51] Kim Ades: I would ask them a very tough question, one that they would probably fight me on [chuckles] but I would say, how was this event, this situation, this circumstance right for you? How was it the right thing? How was it good? How was it perfect? In the way that it was.

And so for anyone who's listening, for those of you who are out there, if there's something that you regret, if there's something that's causing you deep pain, ask yourselves one question: how was that situation, that event, actually useful for me? How was it perfect? How has it brought me to this moment? How was it uniquely designed for me? How does it work for me? Just start thinking about that.

I would love to hear from you actually, if you're thinking about it and you want to share your experiences, please send me an email, I want to hear from you. My email address is Kim@frameofmindcoaching.com. Ferne, how do people reach you?

[00:17:35] Kim Ades: Thank you guys for tuning in. Please like, please share, please comment, please send us some feedback. We'd love to hear from you! And we will see you next time on The Frame of Mind Coaching Podcast. Have a great week, everyone!